It began with a pebble toss, so to speak. And the ripple effect was wholly unpredictable.

Kim Hammes and Judy Sunderman have been friends since they attended high school in the town of Le Sueur, Minnesota, population 4,000. Kim, an extrovert, is a realtor with RE/MAX. Judy, an introvert, farms with her husband. Their personalities complement each perfectly.

Several years ago Kim was an empty nester with a great career and family. But she needed more. She’d known of Kim Valentini and the nonprofit she’d started in 2003. Smile Network International provides cleft lip and cleft palate surgeries to children in countries like India, Mexico, and Haiti, where what is a routine procedure in the U.S. can be cost prohibitive.

Kim Hammes wanted to go on a mission trip. But there was a catch. The only way she, a non-medical professional, could participate in a mission was to combine it with adventure travel. A mission in Peru was on the docket. It followed a rigorous hike along the Inca Trail to Machu Picchu.

Kim doesn’t like to fly. She had never hiked. So it was a stretch.

But desire trumped fear. She mentioned the trip to Judy, who had been dealing with family health issues and needed something to look forward to. Judy loves adventure. She didn’t hesitate. She was in.

Mission participants must pay their own way and raise money to fund the surgeries. Judy was reluctant to ask for donations. But Kim had hosted fundraisers in the past. She assured her new partner that raising $5,000 would be a piece of cake. Whatever they did it just had to be fun.

On the Saturday after Thanksgiving 2013 they hosted the “funraiser” they called the Ugly Sweater Ball at the Henderson RoadHaus Event Center. They raised $16,000.

That year – and every year since – everything has been donated to an event that has grown wings. The venue, auctioneer, media, food, silent auction items, beer, and Christmas trees have all come from residents who have been drawn in by the enthusiasm of these two women. 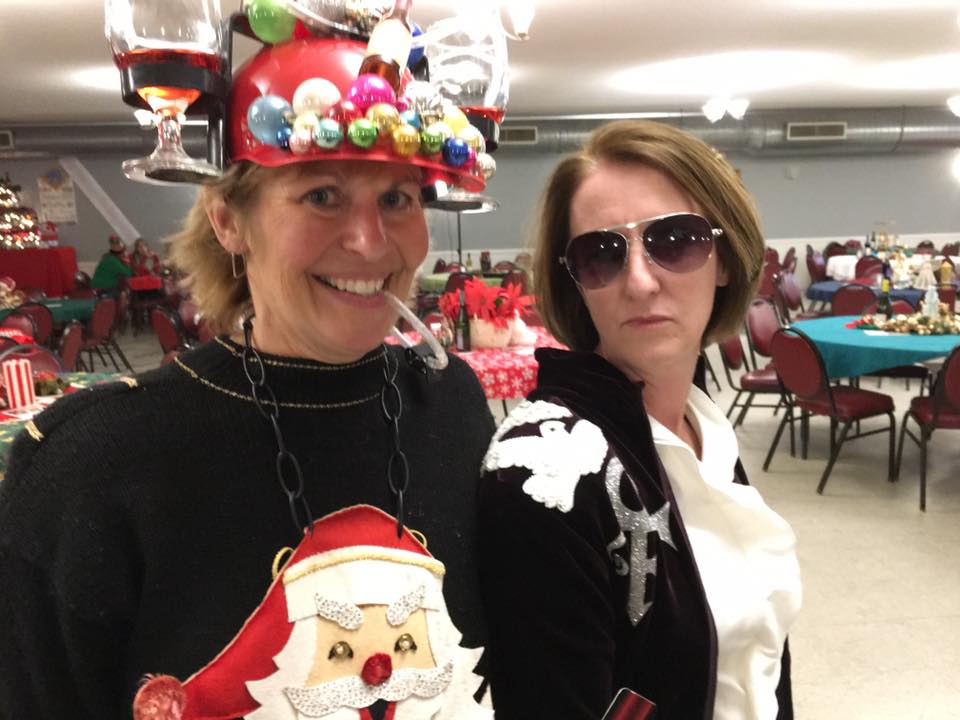 Last Saturday night they raised more than $60,000 at the It Can’t Get Much Uglier Than This Sweater Ball. In four years the two women who wanted to do something different – to make a difference – have raised a quarter million dollars to help children in other countries.

Kim Valentini says, “Kim and Judy have participated in changing the lives of hundreds of kids by inspiring their community to take on their cause. And at the end of the day, that community has lifted up and healed children they will never meet. What is more powerful than that?”

Kim and Judy’s imagination, creativity, and work ethic are limitless. Their volunteerism has become a family and community endeavor. At least 100 people, including their extended families, contribute to the event in some manner. 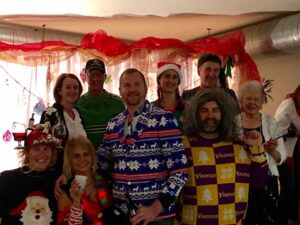 Most residents will only experience a mission trip vicariously, through Kim’s social media posts or through personal stories. This year Smile Network offered the opportunity to bid on a mission trip. As bids went higher and higher, one trip became two.

All because two women have inspired others to participate in their good work in whatever way they can.

What began as an event for residents of Le Sueur and Henderson (population 875) has grown to include people from St. Thomas, Mankato, Belle Plaine, and the Twin Cities. People are adjusting their family traditions to ensure they can decorate a sweater and attend the ball. Guests who reserved one VIP table plan to host two next year. Offers are rolling in to be sweater models.

Like the gift they are giving to so many, Judy and Kim wrapped up our conversation after the ball with a bow.

These communities, our families, and our friends have wrapped their hearts around this as we have. The ripple effect is going out there because we threw that first pebble. We couldn’t raise the amount that we did without all the people who paid $15 to get in, bought $5 raffle tickets and made small donations.

People think the small donations don’t matter. They do. All those donations add up up to half of what we raised. That’s a huge message. Give what you are able. It makes a difference.