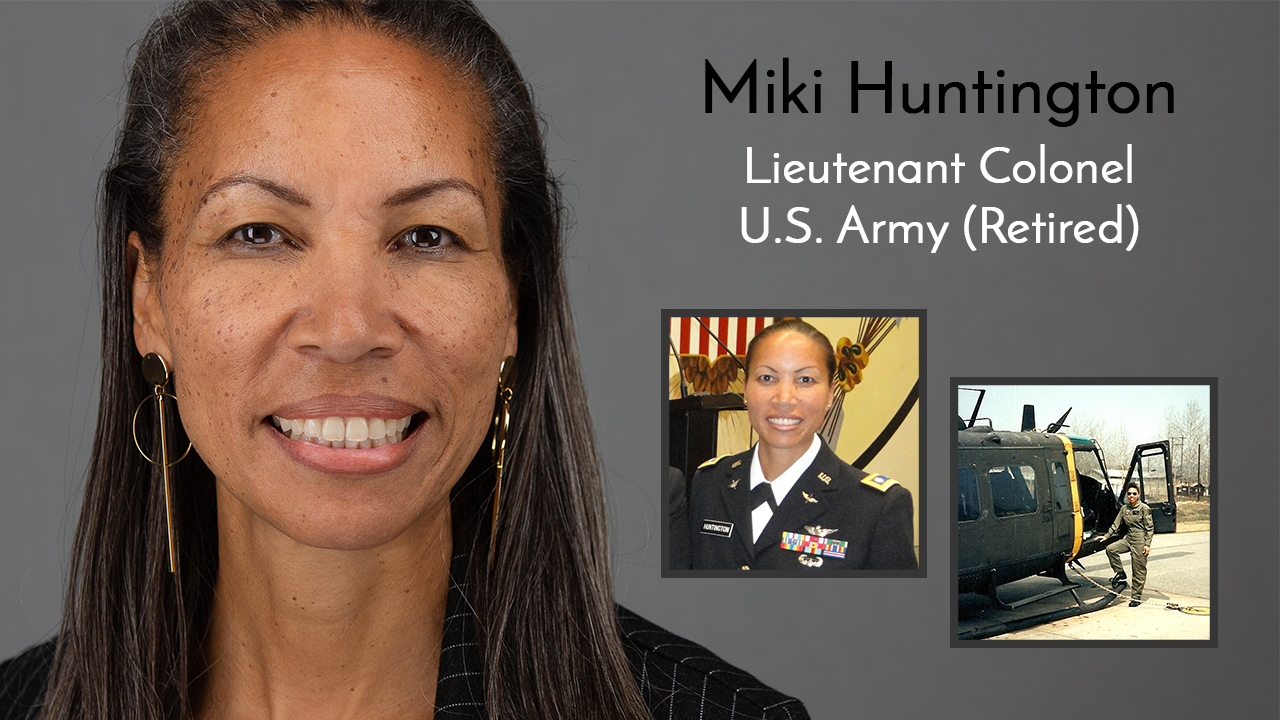 This piece originally appeared in the St. Paul Pioneer Press on February 3, 2019.

The words “don’t bother” or “you won’t make it” don’t resonate with Miki Huntington. In fact, when told not to bother, her instinct is always to push back, for if one doesn’t try or ask, one will never know. Huntington has done so more than once in her lifetime, with impressive results.

Take high school. Her family was poor. There was no money for college, or even applications. Huntington could apply to only one school and she’d set her sights on UCLA. But her school counselor told her not to bother applying. Take a look at junior colleges, she said.

Huntington’s response reflected her innate confidence and tenacity. She ignored the counselor, applied to UCLA and was accepted, as was her twin sister.

Though they worked several jobs, the girls needed another way to make it work. Taking different paths, both sisters ended up in the ROTC program, which is where Huntington pushed back once again.

She wanted to fly helicopters. But when she mentioned her interest to her ROTC instructor, he discouraged her from pursuing the idea. She’d never be accepted, he said, so she shouldn’t bother to apply.

Huntington ignored his advice and was not only accepted, but ultimately became a lieutenant colonel and flew Black Hawk and Huey helicopters.

She was offered a position in the Bush White House working for Vice President Dick Cheney. Huntington never imagined she would work in the White House. For a girl who was counseled to go to junior college, the experience was surreal.

But she’s skilled at making choices that lead to opportunities and at tuning out naysayers who don’t share her confidence or vision of where her life might go.

She operates under the 80 percent rule: There will never be perfect timing. If you’re 80 percent ready to do something, go for it.

Huntington has led a rather unusual life for a Minnesota resident. English is her second language. Born to a Japanese mother and a black American father, she spent the first 10 years of her life in Japan.

She learned how to be resourceful and resilient from her mother. After her divorce, her mother moved her twin daughters to the United States, became a citizen and enrolled in community college. Taking one course at a time she learned English and ultimately earned a degree at age 73.

To her daughters she demonstrated the value of being a lifelong learner and inspired them to follow suit.

Huntington continued her education in the Army, honing her expertise with the Japanese language and obtaining a master’s degree in international studies. Her sister retired from the Air Force as a full colonel and went on to study in New York.

Though she was honored to have the opportunity to serve, Huntington didn’t plan for a career in the military. Rather, she’d anticipated she would fulfill her commitment then move on when the time was right.

It was the people to her left and to her right who kept her in the military for so long, she says. Though she didn’t always feel like she fit in, she experienced no sense of discrimination based on her race or gender, she said. The helicopters she flew didn’t know if she was male, female, black or white.

It was 25 years, three countries, and multiple deployments before the time was right. In 2011, Huntington retired from the Army and moved to Excelsior with her husband, a Minnesota native she met in South Korea.

Several weeks after she retired in her 40s, she finally embarked on the career she’d dreamed of since she was in fourth grade.

These days, Miki, as she prefers to be called, can be found at Minneapolis Community and Technical College by day and at Metro State University one night per week.

In the classroom and online she’s drawing upon both her military and personal life experiences to engage students in thoughtful, respectful discussions about American government, political science, and world politics, as well as educational philosophy and planning.

By sharing some of her experiences, views, and perspective, she encourages her students to feel more comfortable sharing their own.

She chooses her words carefully as she facilitates potentially contentious discussions about current issues with students ranging in age from 16 to 72 and whose political views run the gamut.

She finds that students are more respectful and less combative in the classroom than online. Instead of asking students what they think about hot-button issues she asks them to explain why they hold certain beliefs and how they came to them.

She’s never forgotten the conversations with adults who didn’t share her confidence in her ability to make things happen for herself. Those experiences inform the way she approaches her role in the classroom.

While the folks who dissuaded her had no malicious intent, their words stayed with her. Whether as teachers, mentors, parents, or superiors in the workplace, we need to be mindful of how we communicate, she says.

“Things that adults say have such an impact on young people. It’s so important to remember that.”

“That’s really the better way. There are so many negative things that we, without thinking, can say to our younger people without realizing the long-term impact,” she says. “I’m 50 years old now and I’m still thinking about that high school counselor.”

Miki Huntington will speak on April 26 at TeamWomen’s 8th Annual Women’s Leadership Conference, a full-day event that features inspiring, hopeful stories from powerful female leaders around the Twin Cities. If you’d like to attend or get more information, click here.