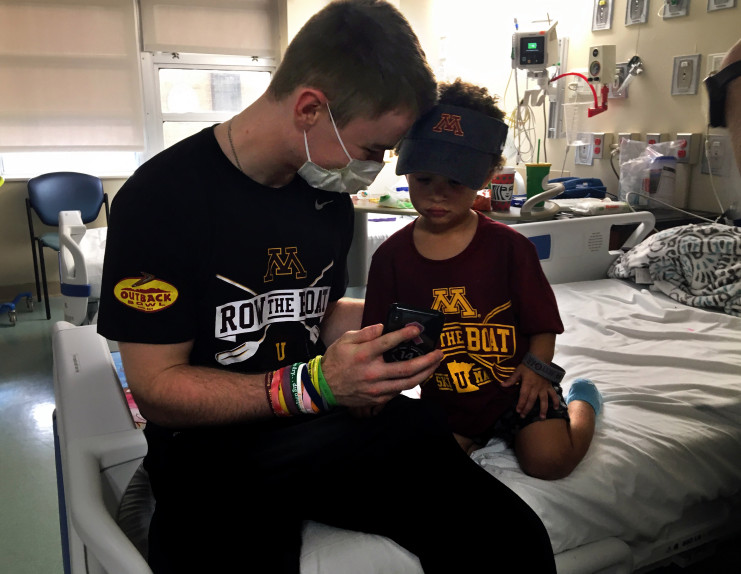 I’d never heard of Casey O’Brien until my son-in-law emailed the link to an ESPN story with a note that said,  “This one hits rather close to home.” He was referring to the video of O’Brien’s speech at a Big 10 kickoff luncheon last July.

I wasn’t the only one in my family to watch the video of his speech through my tears, for his story does strike close to home.

Standing before an audience of 1500 last July, the St. Paul native shared an incredible story about how his dream of playing college football has carried him through a daunting battle with cancer.

O’Brien has captured the interest of local and national media. His story has been widely shared, on ESPN, dailygopher.com, gophersports.com and in this paper, to name a few.

Inspired by his message, I’ve watched and read. Drawing from those sources, this is what I’ve learned.

At age 13, O’Brien, who lived to play sports, felt a persistent pain in his knee that eluded a diagnosis.

Shortly before Christmas 2013, the Cretin-Derham Hall sophomore learned he had osteosarcoma. He greeted the rare bone cancer diagnosis with confidence and resolve. He dismissed the doctors’ prediction that he would never play football again. Those doctors hadn’t met him and didn’t know how much he loved the game, he says.

He spent nine months undergoing surgery and chemo. He refused to stop playing football, though he switched from quarterback to placeholder.

But the cancer has also been tenacious. It’s returned three times. Though it’s wrought more surgeries and chemo, it hasn’t bested him.

He’s an underdog who’s not afraid of a challenge. He’s refused to live in fear of survival statistics and is consciously unaware of them.

O’Brien always dreamed of playing college football. But only one team gave him a medical clearance.

When he joined the Minnesota Golden Gophers as a walk-on, he told Coach P.J. Fleck he did not intend to stand on the sidelines. He intended to play. He intended to contribute.

On Oct. 23, the redshirt sophomore finally got his chance. With the Gophers well ahead of Rutgers, Fleck put him in the game to hold the ball for three extra points. O’Brien’s teammates swarmed the field to pound his helmet before he and Fleck shared a tearful embrace that went viral on social media.

In the Rutgers locker room, an emotional Fleck told the team, “We have a living angel with us … rowing the boat with us.”

The affection and admiration are mutual.

O’Brien says Fleck and his row-the-boat culture have taught him a lot about life, football, and everything in between.

In the past six years, O’Brien has spent hundreds of days at the University of Minnesota Masonic Children’s Hospital. He’s undergone surgeries on both his knee and his lungs – surgeries weathered athletes typically undergo, not young ones.

He’s lost his hair but not his determination. Each time he’s endured treatment he’s continued to attend school, practices, and games.

At just 20 years old, this young man has figured out many of the secrets to living one’s best life. His playbook is instructive.

He ends every night and prepares every day as if he’s going to play ball.

He posts pithy reminders about how to live his life.

“If you believe, you can make it happen.”

As the Golden Gophers head to the Outback Bowl this week, I suspect O’Brien isn’t the only player who had to dig deep to become a member of the team.

O’Brien’s family is a huge part of his team. He’s the youngest of three, and a sister, brother, or parent has slept in a makeshift bed next to his every one of the hundreds of nights he’s spent at the hospital.

As to his Golden Gophers teammates, O’Brien says, “There is something special about being part of a team. I know I have 120 brothers who have my back.”

As to navigating cancer – and life – O’Brien is both student and teacher.

He frequently returns to the Masonic Children’s Hospital to visit the patients. Not knowing anyone his age who had beaten cancer was hard for him when he was in the hospital. He makes a point of showing those who are fighting their own battles that it’s possible to put cancer in its proper place.

He wears wristbands of patients and families he’s met, some of whom did not walk out of the hospital. He assures the patients that when they watch the Gopher games from their hospital rooms, they are right there with him.

As much as he loves it, as much as it has driven him to push through cancer, O’Brien says football is just a game, and that being healthy and able to spend time with the people he loves is ultimately more important.

“I’m thankful for every day we get to spend together as a family because I know  that tomorrow is not promised,” he says.

“All the tests, scans, bloodwork, loss of hair, chemotherapy and everything else that comes with fighting cancer has been worth it.  We have beaten it four times and I am now playing college football.”