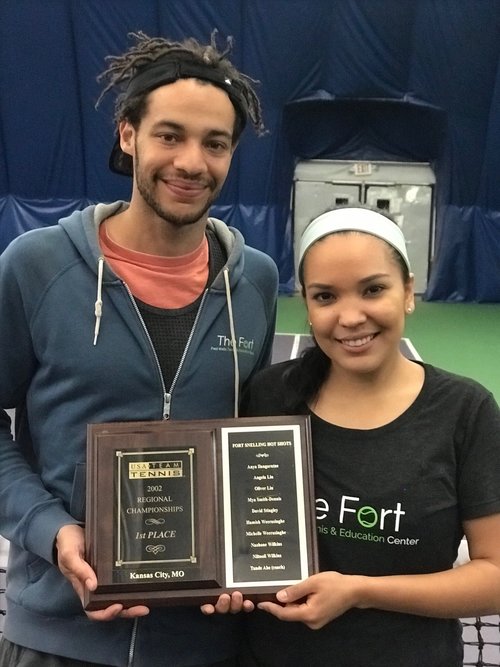 It’s like the “Cheers” of tennis. When I walk into the Fred Wells Tennis & Education Center (FWTEC), I, a fairly new member, am greeted by name. And that makes me feel right at home.

Perhaps you’ve driven by FWTEC without even noticing it. It’s a relatively obscure facility located just east of the Minneapolis/St. Paul airport. The Fort, as it is known, sits on a parcel of land leased from the City of Minneapolis.

When fall arrives, The Fort will have a new look, as its lease terms required it to undergo significant improvements. New bubbles, lighting, and air conditioning, as well as an additional court, will usher tennis players into a new season.

The Fort is the tennis home for youth, men and women of varied backgrounds. It’s comfortable but not glitzy; there are no strawberries and cream at The Fort, a la Wimbledon tradition.

With its welcoming ambiance, The Fort is a favorite hangout for people of all ages, including Jim Nichols. Nichols learned to play tennis when he was in his 40s. In his late 80s now, Nichols arranges matches for scores of seniors from September to May. He appreciates the competition and exercise tennis affords and the camaraderie that is part of the fabric of The Fort.

But there is more to The Fort than morning drills and league play for adults. The real magic happens at The Fort in the afternoons.

The Fort’s Tennis Works program enables kids who qualify for free or reduced lunch to be part of a welcoming community and to learn both tennis and critical life skills. Drawing upon The Fort Five Values, staff and volunteers help kids to learn about integrity, safety, respect, kindness, and commitment on and off the court.

Whether it is the after-school program, the in-school programs, summer outreach or Fort First Fridays (a drop-in program for middle and high school students), the goal is to keep kids active and engaged.

Because they need to be. Nearly one in three children is obese or overweight. Today’s 10-year-olds are expected to have a shorter life expectancy than their parents.

And research confirms that active kids perform better in school, are more likely to attend college, and are less likely to get into trouble.

The Fort’s Tennis Works program attracted the attention of the Aspen Institute, which brings together diverse thought leaders to address complex societal issues. Project Play, one of the Aspen Institute’s many initiatives, is focused on making quality, affordable sports activity available to school children.

In 2018, The Fort was named one of 21 Project Play champions in the U.S.  –  the only one for tennis — because its goals align with best practices at a national level.

Since 2002, the Fort has provided an opportunity for hundreds of youth to spend hundreds of hours learning about perseverance, focus, and commitment. By providing scholarships and programming at The Fort and select Minneapolis and St. Paul Schools, the nonprofit opens doors that might otherwise remain closed.

David Stingley grew up with The Fort. He watched as it was being constructed from the gravel up because his father, Tony, was part of the group that brought The Fort to life in 2002 with seed money from Fred Wells.

From the time he was in sixth grade, Stingley wanted to be a tennis pro. He spent hours every day hitting tennis balls, becoming so skilled he attracted the attention of the UW Eau Claire tennis coach. An average student, tennis became his ticket to college.

The more he played the more Stingley realized how much work goes into being a professional tennis player. It was not in the cards. So, he pivoted.

In 2014, he returned to The Fort as a college graduate and full-time teaching pro. Today, he works with adults and juniors in the fee-based program as well as with participants in the Tennis Works program.

Tooli Wilkins started playing tennis when she was 8 years old. When she moved to Minnesota from Arizona and discovered The Fort, she was delighted to see other kids of color. She and Stingley played on the team of 10-year-olds who won the nationals their first year at The Fort. That experience forged a bond that endures today.

As an introvert, Wilkins discovered tennis was a conduit for meeting people, though it didn’t require her to socialize. On the court, she could just focus on the ball and her opponents, which she did so well she earned a college scholarship that took her to North Carolina.

Like Stingley, Wilkins returned to The Fort after college graduation. Together, the friends and former teammates are teaching the next generation of tennis players on the same courts that felt like a second home to them years ago.

Stingley and Wilkins are just a couple of the young people for whom The Fort provided a safe place to develop both skills and friendships. While their story serves as an inspiration for any child who dreams of mastering a sport, it also illustrates a firmly held belief of mine.

Life is best lived when you find something you love to do.

It’s even better if you can do it with someone you care about.

I’m lucky to have found my way back to tennis while I still have my health, some athletic ability, and both a life and doubles partner. What about you? What is that thing you love to do? Do you have someone to share it with? Where is your “Fort?”

If you enjoyed this piece you can sign up here to have Caryn’s op-eds sent by email. You might also appreciate her award-winning memoir, “Bitter or Better,” in which she shares inspiring stories about choosing better over bitter when faced with adversity. “Bitter or Better” is available on Amazon in paperback and electronic forms. A signed copy can be purchased here.